Put simply people are afraid of the unknown…..the fact that we test antenatally for Downs at all, surely means its a bad thing to have?….Something that must be screened out at all costs?!  Add to that a negative attitude from medical staff that you may encounter and its no wonder the statistics for abortion of foetuses with Down Syndrome are so high.

If we stopped using eugenics to wipe out this wonderful cross-section of humanity then everyone might have an opportunity to meet/ know/ love/ befriend a person with DS and be the better for it!  The fear factor would no longer apply…..

When I, aged 32 yrs, and my partner rocked up to our 1st ever 12 week pregnancy scan, wearing leathers (having come on a motorbike) and heard the words “Are you going to tell her, or am I?” we knew we were in for an unexpected ride….

But the biggest surprise and shock to me was not the diagnosis itself but that there was only 1 assumption made by the doctors we met…that we would not want to continue with the pregnancy! I was horrified that they offered me a termination there and then, without any further testing to be certain of the cause of the large nuchal fold reading (which can be many things). (See also: Nuchal Fold Scan on this site)

And even when I went for CVS the next day, the doctor performing the procedure said “We can all live with ourselves better if we find out for certain”….except that I was having the test because I needed to know exactly what we were dealing with to get prepared…..NOT because I needed to justify termination due to an ‘adverse outcome’ (his words). I remember coming away from the hospital feeling really disappointed and sad – I thought hospitals were places to support people with medical issues, not be dealing in damn statistics and eugenics…and that little life inside of me seemed to have so little importance in their eyes….which just made me all the more protective of her!

But what of those women in a similar situation to me….how many go through with a termination because it felt like that was the advice the doctors were giving?  It might sound to them, in their confused/ shocked state, as if that is what everyone else would do……what would be expected….

And why was I rapidly hauled into (made an emergency appointment with) my local doctor once they realised I had declined any testing when I became pregnant with my 2nd child?  He wanted to talk to me about why I didn’t want testing and did I understand the ‘risks’….is it this fear that gives us the terrible statistic of 94% termination rate for babies with DS? And even worse, allows abortions up to and including birth on the diagnosis of DS? (See Abortion on Grounds of Disability: Eugenics at work? on this site).

I follow the excellent blog “Downs Side Up” by mum of 2, Hayley Goleniowska.  She was recently asked to go to the Houses of Parliament for a Parliamentary Enquiry into the current UK law on Abortion on the Grounds of Disability.

Current abortion law limits abortions to 24 weeks except in the case of ‘Ground E’ abortions = babies ‘at high risk’ of ‘severe handicap’ , for whom a termination is possible ‘up to and including during birth.’  The problem is that the term ‘severe handicap’ is not clearly defined and open to interpretation.

Of the 2,307 Ground E abortions performed in 2011, 22% (512) were undertaken due to babies having Down Syndrome.  It has been the collective experience of many families with a child with DS, that medical professionals often use negative language when reporting a diagnosis of Down’s and that there is an expectation that the mother would wish to terminate (see my post ‘Nuchal Fold Tranlucency Scan in ‘On Your Soapbox‘).  This could potentially put subtle pressure on the expectant mother to terminate.

A number of children with Down Syndrome are now being featured in main line clothing catalogues. This is an important step for inclusion and about time we say! 🙂

Look out for the following catalogues:

Today Mr Sulu of Star Trek, or as he is better known, George Takei, posted a picture from one of the sites that we link to idscforlife.org: 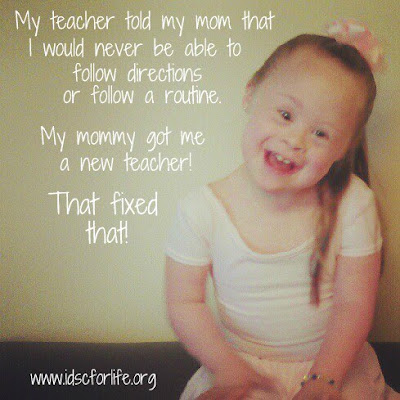 The sentiments of the image are exactly what we believe, follow and support. Thank goodness for friends, family and professionals who DO NOT think as this girl’s first teacher did.

“Never look at limitations.. Push the boundaries! Break free and fly!” attributed to Colette Pretorius on George’s comments for the image

Thank you George for making the situation more visible to your masses of ‘followers’. We salute you!